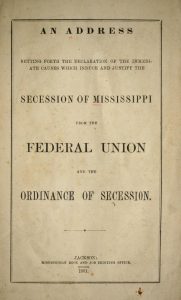 Declaration of the immediate causes which induce and justify the secession of Mississippi from the Federal Union, and the ordinance of secession. Jackson, Miss.: Mississippian Book and Job Printing Office, 1861.

Driven by the proslavery ideology that the University of Mississippi worked so hard to instill in its students, members of Phi Sigma, one of two antebellum literary societies on campus, embraced secession wholeheartedly.

Roughly six weeks after Mississippi became the second state to secede from the Union, at the same February 1861 meeting during which the Phi Sigma Society voted to burn two abolitionist books held in its library, the group also decided to purchase a copy of the Mississippi Ordinance of Secession to take their place.1 This document, which was written by University of Mississippi ethics and metaphysics professor L.Q.C. Lamar, officially dissolved the relationship between the United States of America and the state of Mississippi. It was accompanied by a declaration that laid bare the causes of secession. “Our position,” it stated at the outset, “is thoroughly identified with the institution of slavery.” The document then presented a series of “facts” that proved “the dangers” posed by the federal government “to our Institution.” Among them, the refusal to admit “new slave States into the Union,” the promotion of “negro equality, socially and politically,” and the creation of “associations to carry out its schemes of emancipation.”2

Two months later, when the Phi Sigma Society met one last time, during the final weeks of the final term before the college closed for the Civil War, the organization decided to apportion $125, a majority of the remainder of its funds, to the University Greys, a Confederate regiment made up of University of Mississippi students that at least eighteen members of Phi Sigma also joined.3

Following that academic term, most students left school prepared to fight for the institutions and ideals that the University and its literary societies taught them to hold dear.

2 An Address Setting Forth the Declaration of  the Immediate Causes Which Induce and Justify the Secession of Mississippi from the Federal Union and the Ordinance of Secession (Jackson: Mississippian Book and Job Printing Office, 1861), 2, 3.