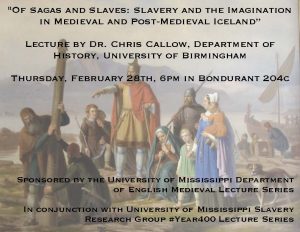 Join UMSRG and the Department of English on Thursday, February 28th, 6PM in Bondurant 204C as it hosts Dr. Chris Callow of the Department of History at the University of Birmingham for the #Year400 Lecture Series event “Of Sagas and Slaves: Slavery and the Imagination in Medieval and Post-Medieval Iceland.”

Callow is a Lecturer in Medieval History at the University of Birmingham, where he teaches and researches the history of the Viking Age. He has been a member of the Council of the Viking Society for Northern Research, and is a founding member of the Centre for the Study of the Middle Ages at Birmingham. He is the author of Landscape, Tradition and Power in Medieval Iceland and The Viking Diaspora.