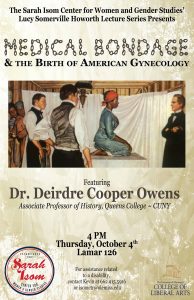 The University of Mississippi Slavery Research Group and the Sarah Isom Center for Women and Gender Studies will host  for a talk entitled “Medical Bondage and the Birth of American Gynecology,” where she will discuss how the institution of slavery aided early southern gynecological surgeons to advance the field based on their experimental work on enslaved women. This event, which is part of UMSRG’s #Year400 Lecture Series, will be held Thursday, October 4th at 4PM in Lamar Hall 126.

Deirdre Cooper Owens is an Associate Professor of History at Queens College, CUNY. Cooper Owens has received numerous awards and fellowships including a residential postdoctoral fellowship at the Carter G. Woodson Institute for African American and African Studies at the University of Virginia and an American College of Obstetricians and Gynecologists Fellowship to explore medicine, gender and the historical influence of race on each of these categories.

Her book, Medical Bondage: Race, Gender, and the Origins of American Gynecology, was released in 2017 by The University of Georgia Press.