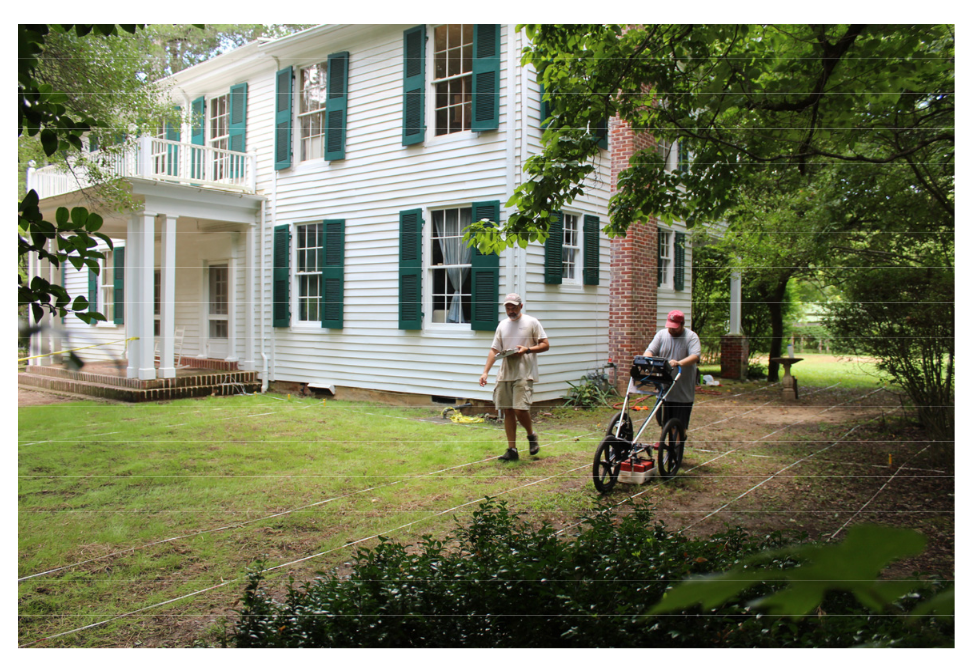 Conducting a ground-penetrating radar survey behind the main house at Rowan Oak.

The University of Mississippi’s archaeology team is still searching for remnants of slave life on the grounds of Rowan Oak.

According to Dr. Tony Boudreaux, director of the university’s Center for Archaeological Research and associate professor of anthropology, no one is giving up just yet. The project began in 2016 as part of research conducted by the University of Mississippi Slavery Research Group after records indicated the home’s builder, Robert Sheegog, claimed ownership of eight slaves in 1860.

“One of the real strengths of archaeology is that we deal a lot with the residue of everyday life,” Boudreaux said. “As far as researching slavery, looking at the humdrum, everyday stuff is very important, because we don’t know a lot about the everyday activities of enslaved people here.”

There are very few slave narratives in existence, Boudreaux said, and any biographies at the time would have presumably been written by slave owners and therefore biased.

Sheegog built the home now known as Rowan Oak as a townhome for his family, while an estimated 75 other enslaved persons he laid claim to lived and worked on his plantations in Tallahatchie and Panola counties.

“The archaeology so far at Rowan Oak has not shown us much, if anything, about slavery,” he said. “We know the house was part of that original landscape. Architectural historians have also figured out that at least one building, the brick building behind the main house, was part of the Sheegog Estate as well.”

With the help of undergraduate and graduate students, as well as those in the department’s public archaeology class, Boudreaux said a variety of tests have been conducted based on what currently is limited knowledge about the location of spaces where slaves lived and worked.

In the northern part of the property, shovel tests, in which one digs a trench that is approximately as wide as a shovel and 40 centimeters deep, have uncovered artifacts dating back to the 1900s, which Boudreaux said are probably indicative of African-American servants hired by William Faulkner.

“We recently did some ground-penetrating radar out there in an area where photographs suggested a building used to be standing but isn’t there anymore,” he said. “We didn’t find evidence of that building, but we did find evidence of what looks like a buried brick walkway that may go from the main house to the back of the property.”

Knowing where something isn’t, Boudreaux said, is almost more valuable than knowing where it is. Looking at an aerial view of the original Sheegog property, which includes Bailey’s Woods and other surrounding acreage, Boudreaux said he sees no reason why his students wouldn’t be able to survey the whole thing. Providing students with a protected place to literally get their hands dirty is invaluable, he said.

This fall will see the return of the public archaeology class and a renewed effort to discover and contextualize the role of slavery as it relates to Rowan Oak and ultimately, its most famous resident, William Faulkner.

“The past is all around us. It’s in our architecture, it’s there archaeologically, it’s underneath our feet on the surface and in our current social and economic system,” Boudreaux said. “The fact that [Faulkner] bought that house, to me it speaks to how inextricable those past systems and relationships are from the world we live in today. You can’t really understand or try to make sense of the world in which we currently find ourselves without having a holistic view of that past.”