NYT: Ole Miss Edges Out of Its Confederate Shadow, Gingerly 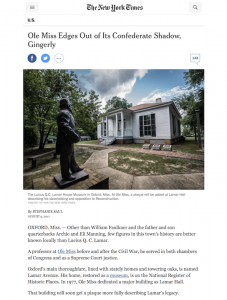 OXFORD, Miss. — Other than William Faulkner and the father and son quarterbacks Archie and Eli Manning, few figures in this town’s history are better known locally than Lucius Q. C. Lamar.

A professor at Ole Miss before and after the Civil War, he served in both chambers of Congress and as a Supreme Court justice.

Oxford’s main thoroughfare, lined with stately homes and towering oaks, is named Lamar Avenue. His home, restored as a museum, is on the National Register of Historic Places. In 1977, Ole Miss dedicated a major building as Lamar Hall.

That building will soon get a plaque more fully describing Lamar’s legacy.

Lamar drafted the state’s orders of secession, funded his own Confederate regiment and held 31 slaves. After the war, he remained a divisive figure, delivering speeches that riled up whites in a violent 1875 election that he said “involved the supremacy of the unconquered and unconquerable Saxon race,” according to one newspaper account of the day.

Across the country, universities are trying to reckon with their ties to slavery and its champions. Georgetown recently apologized for its ownership and sale, in 1838, of 272 slaves. Yale said it would rename a building honoring an alumnus, John C. Calhoun, a fervent supporter of slavery. Harvard erected a plaque memorializing four slaves owned by Harvard presidents during the 1700s.

But perhaps no college has had to handle the effort as gingerly as Ole Miss. Though the Confederate flag was banished from the campus two decades ago and “Dixie” is no longer played at football games, the ghosts of the Old South still roam the magnolia-scented campus, and many alumni hold fast to traditions.

The Lamar Hall plaque is one of five new ones to be installed to honestly describe the offensive history associated with campus landmarks and acknowledge the contributions of slaves. The university announced the moves last month following the recommendation of a committee that included faculty and alumni with a range of views.

The committee recommended the renaming of one building — Vardaman Hall, named for Gov. James K. Vardaman, who openly advocated lynching.

The moves put the University of Mississippi, as the college is formally known, near the forefront of a movement called contextualization. “Our whole framework is predicated on the principle that it’s better to educate and contextualize rather than remove or move or erase,” said the school’s chancellor, Dr. Jeffrey Vitter.

But at Ole Miss, even that middle ground can be excruciatingly slow and painful to reach. One plaque, placed at the monument to a Confederate soldier, was thrown out and redone last year. Both the campus NAACP and some history professors objected to its original wording because it failed to mention slavery as the cause of the Civil War.

And on the other side, members of the student senate pushed through a resolution to try to “pause” the committee process.

Hovering over deliberations was the fact that descendants of some of the historical figures remain in Mississippi. Don Barrett, a lawyer from Lexington, Miss., who called himself the representative of conservative alumni on the committee, described a series of compromises and called his fellow committee members, some of them faculty, “liberal as hell.”

“We struggled for months,” he said.

Ole Miss’s identity is intertwined with slavery and the Jim Crow era, partly because of the state’s history, but also because the school vigorously embraced Confederate symbols.

It was partly the university’s difficulty in recruiting top black athletes that led to the removal of the most offensive symbol. Two decades ago, the chancellor at the time, Robert Khayat, received death threats after he decided to eliminate the Confederate flag.

By 1979, the mascot had been changed from a student dressed in a gray Confederate uniform to a friendly-looking Disneyesque character named Colonel Reb. Eventually he, too, was replaced by Rebel Black Bear, a reference to a short story by Faulkner. “Dixie” was played less frequently, then banned in 2016.

Mr. Stewart, whose group sued the school in an attempt to block the plaque at the Confederate statute, argues that the university is defiling historic objects. “They just kind of do a little bit here, a little bit there, and maybe you’ll forget about it,” he said.

Other black students said they were warned, too, but ultimately had positive experiences on campus, where about 13 percent of undergraduates are black. Yet they wondered why some Confederate symbols remain.

“The Confederate soldier is mind-baffling,” said Jaquann King, a marketing major from Port Gibson, Miss., referring to the statue on campus. “Why is that needed? You have students here who are offended by it.”

Other traditions are tied to the Confederacy, often in esoteric ways. As prospective students toured the campus one day last month, a guide explained why Ole Miss fans wear church clothes to football games.

The football team, he said, represents the troops heading off to battle, harking back to 1861 when students enlisted en masse in the Confederate Army. Their families, the tradition goes, saw them off wearing their Sunday best.

Even the nickname Ole Miss may be an ode to the way things were; some historians think it comes from the name that slaves called the plantation owner’s wife. A consultant in 2014 advised the university to consider the name’s implications, a move the alumni probably would never entertain.

Nor would they change the team’s name, Rebels. Instead, the school is trying to reframe it.

“We’re not Rebels in the old sense,” Dr. Vitter said. “We’re Rebels in a very positive sense. We will always continue using that brand because it’s one of the most positive images nationally among all colleges.”

Efforts at contextualization gathered steam after a campus disturbance in November 2012 in which students protested President Barack Obama’s re-election, some yelling racial epithets.

Besides the dispute over the statue, the biggest argument involved George Hall, named after James Zachariah George, a United States senator who historians say helped lay the foundation for Jim Crow by placing a clause in the State Constitution requiring that voters be able to read or understand it. The rule disenfranchised thousands of Mississippi blacks for decades, and spread to other Southern states.

“The more you learn how ugly it is, the more you wonder, is this someone we need to honor?” said Dr. Jeffrey Jackson, a professor of sociology who served on the committee.

Several members wanted George Hall renamed, even though George is an ancestor of a popular retired vice chancellor, Gloria Kellum, who has worked to restore his home, Cotesworth.

One committee member suggested that Dr. Kellum’s kinship was a factor in the decision not to rename the building.

Dr. Kellum, who said she had not been involved in the deliberations, acknowledged that “George is a name that’s associated with a lot of history that’s disturbing to people.” She said that she supported the contextualization because “I think it’s important for people to understand.”

Paul B. Johnson III, a lawyer in Hattiesburg, Miss., got a call before the name of Paul B. Johnson Commons was tweaked, according to Mr. Barrett, the committee member.

As lieutenant governor in 1962, Paul B. Johnson Jr. physically blocked James Meredith as he sought, ultimately successfully, to enroll as the school’s first black student.

Paul B. Johnson Jr. parlayed his defiance into a victory in a campaign for governor in 1963, running on the slogan “Stand Tall With Paul.” Some students wondered why the university would honor him.

In reality, the building was named after Johnson’s father, himself a former governor. Rather than being contextualized, a “Sr.” will be added to the building’s name, the committee decided.

“Paul Johnson III is a dear friend of mine,” Mr. Barrett said. “He laughed and was good-natured about it. He said his father made it very clear during his lifetime that the building was named for his father.”

The renaming of Vardaman Hall requires approval of the state’s college board. Vardaman’s open advocacy of lynching was deemed “exceptional” by the committee — meaning that his behavior was beyond the norm even for his day.

As for Lamar Hall, its plaque will mention Lamar’s slaveholding, adding that “his prominence obscured the active role he played in dismantling Reconstruction in Mississippi to the detriment of the state’s African-American citizens.”

Mr. Barrett said: “I think L.Q.C. Lamar was one of the greatest statesmen Mississippi has ever produced and I don’t like the plaque, but it was a compromise.”