Join UMSRG for a Twilight Tour of Campus 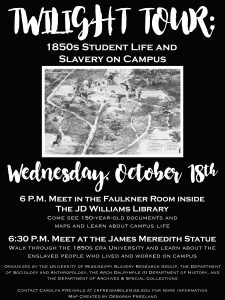 On Wednesday, October 18, a major symposium on “Universities, Slavery, Public Memory, & the Built Landscape” will convene at the University of Virginia, with four members of the UMSRG participating. As part of these events, that evening our friend Joseph McGill of the Slave Dwelling Project will be leading more than 100 individuals at the University of Virginia in an overnight stay at sites where enslaved people lived while they worked for faculty and students in order to honor these so-called “campus slaves” and get a glimpse into their lives.

In solidarity with the participants and students involved with the “Universities, Slavery, Public Memory and the Built Landscape” symposium, that same night, Wednesday, October 18, the UMSRG will be hosting a twilight tour centered around 1850s student life and slavery on campus. The tour starts at 6 P.M. in the Faulkner Room in the J.D. Williams Library, where political papers archivist and associate professor Leigh McWhite will curate a collection of campus maps and other documents that date to the antebellum era. At 6:30 P.M. the tour continues in front of the James Meredith statue. Led by history graduate student Justin Rogers and director emeritus of Drayton Hall George McDaniel, the tour will focus on the enslaved laborers who lived and worked on our campus, highlighting their efforts to construct the earliest University structures, including the Lyceum, Ventress Hall, the Croft Institute, and the Hilgard Cut, their living conditions, and their encounters with the student body.