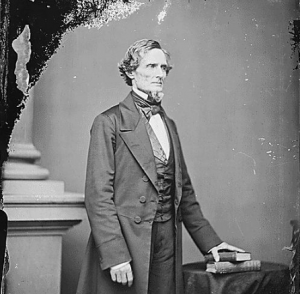 On July 15, 1852, at the invitation of the University of Mississippi’s two antebellum literary societies, Jefferson Davis delivered an address that challenged students and other attendees to defend slavery and the state of Mississippi against ideological attacks. His remarks took place at an annual event during which the Phi Sigma Society and the Hermean Society celebrated their founding by bringing  a well-known speaker to Oxford. Since the faculty mandated that each student join a literary society, it seems likely that every student attended this address, but Davis’s comments were almost certainly heard by every faculty member and many residents of Oxford as well. Before this crowd, which had assembled at the Oxford Methodist Episcopal Church,1 Davis warned of a coming crisis and described ideological assaults on the institution of slavery:

An unholy crusade has been directed against the domestic institution of the South, under the pretext of a holy horror of the existence of that African slavery which has continued among us after it had ceased to be profitable among our assailants. In vain have appeals been made, to the requirements of the constitution, and the duties of the states. All obligations, social and political, these self-canonized saints proclaim to be annulled by the higher law revealed to them, and which was theirs to execute; though ruin should be thus brought upon a section, and misery be the future lot of both the happy races now inhabiting it. Religion has been perverted from its mission of peace, good will, and brotherly love, to sanctify this unprovoked hostile aggression, and the word of God offered as authority for the commission of half the crime defined by the Decalogue.3

Davis characterized the rising tide of abolitionism in the North as “the most dangerous agitation which has ever disturbed our Union,” and, like Jacob Thompson before him, Davis suggested the college should instill a fierce loyalty to the state of Mississippi and slavery in their students.4 Davis told the students they could potentially play a key role in maintaining slavery, stating:

To you, the young men of Mississippi and the [students] of her University, I especially look for the protection of her rights; from you I expect such keen sensibility to her fame and her honor as sons feel for their Mother, and that community of sentiment which gives strength.3

Ultimately, Davis’s warnings and predictions from his address to the Phi Sigma and Hermean Societies became a reality. University of Mississippi students fought to defend their proslavery values and principles when the Civil War broke out less than a decade later.

1 Oxford Democratic Flag, July 21, 1852. The Oxford Methodist Episcopal Church, which was founded in 1834, is today the Oxford United Methodist Church.

2 Jefferson Davis. Address Delivered by the Hon. Jefferson Davis Before the Phi Sigma and Hermean Societies, July 15, 1852. The Department of Archives and Special Collections, J.D. Williams Library, The University of Mississippi, 7.