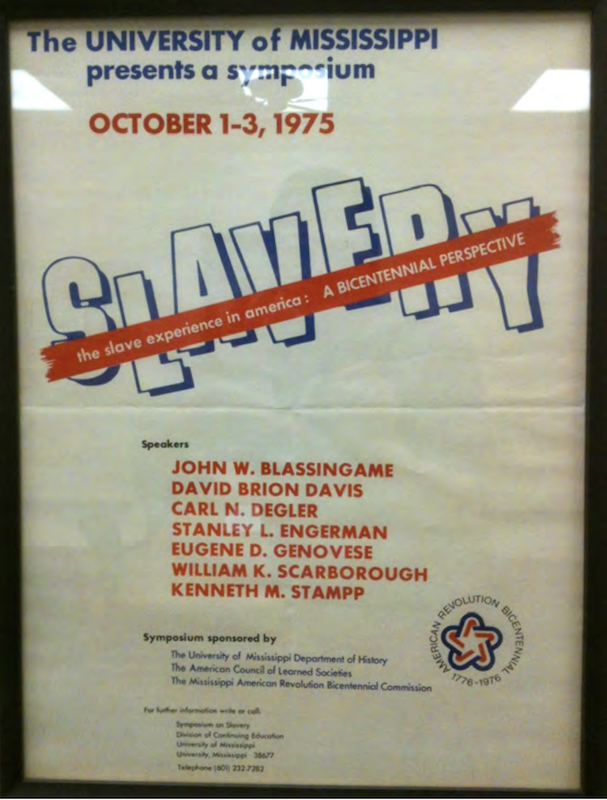 In Fall of 1975, the University of Mississippi hosted the first in a series of History Symposiums which would eventually be named for the Chancellor who lent his support to the effort: Porter Fortune.

The event was historic not only for its inaugural implications but also for its subject matter: “The Slave Experience in America: A Bicentennial Perspective.”

The fact that a University in the Deep South—a previously all-white University that had experienced only  a decade earlier one of the most tumultuous racial conflicts associated with desegregation in the nation—was hosting an academic  conference on a subject so central to  the African American experience  was so extraordinary that the  symposium itself made national  headlines. The symposium was also  momentous because of the caliber of  scholars it attracted. The seven  speakers included two Bancroft  History Prize winners (Stanley L. Engerman  and Eugene D. Genovese), one Lincoln Prize  Winner (Kenneth M. Stampp), one National  Humanities Medal winner (David Brion Davis),  two winners of the Pulitzer Prize (Carl N. Degler and Davis), and one Nobel Laureate (Engerman).

Perhaps it was the intriguing opportunity to speak about slavery in a place that had recently gone through such tumult, and a place that was so central to the history of the subject of their expertise that attracted such a large number of distinguished slavery scholars to this campus. Perhaps it was the progressive efforts of the symposium organizers, including Historians Harry Owens and David Sansing, but also Chancellor Fortune himself, that made it happen. These organizers were all wrestling with recent campus difficulties in which the predominately white students were making life difficult for the small but growing African American student body and Harry Owens, in particular, had just five years earlier created the university’s first “Black Studies Program.”

Certainly, a symposium like this was exactly what he had in mind when he said:

“[Black people’s] historic struggle against almost overwhelming odds, not only enlarges our understanding of American history. But it also offers a great lesson to all Americans. The history of millions of black people fighting, not only to survive, but more important, to overcome institutionalized racism, can provide an historical perpective of the present and a hope for the future.” (Cohodas, The Band Played Dixie, p. 177)

Owens, Sansing, Fortune and the other supporters and organizers of the event surely must have seen the potential in what they were creating. For in the years that followed, the 1975 symposium became the impetus for several new faculty positions in the History Department funded by the Ford Foundation, the arrival of symposium participant and eminent slavery scholar Winthrop Jordan to a full time position in the Department of History, the founding of new campus initiatives and centers, including Center for the Study of Southern Culture and, of course, the Porter Fortune Symposium series itself, which continues to this day.

In short, the 1975 symposium, borne of a progressive vision in a university community trying to heal from tumult and crisis, opened up a lasting space on this campus for a more inclusive discussion. Since that time, there have been many other significant achievements on this campus that have sought to broaden this space and widen the opportunities for a more honest reflection on the relationship between our University (and our State’s) relationship with our racist past. Over the past 40 years the University has built up a respectable record of teaching and research on the topic of American slavery and its legacies.

It is this spirit and tradition on which the University of Mississippi Slavery Research Group hopes to build.