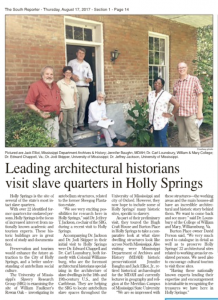 Holly Springs is the site of several of the state’s most intact slave quarters.

With over 22 identified former quarters for enslaved persons, Holly Springs is the focus of increased interest from nationally known academic and tourism experts. These historic buildings are in great need of study and documentation.

Preservation and tourism would enhance the future attraction to the City of Holly Springs, and a better understanding of antebellum social culture.

Accompanying Dr. Jackson and Dr. Jodi Skipper in their initial visit to Holly Springs were Dr. Edward Chappell and Dr. Carl Lounsbury, both formerly with Colonial Williamsburg, who are the foremost architectural historians specializing in the architecture of slave dwellings in the 18th- and 19th-century U.S., and the Caribbean. They are helping the SRG to locate antebellum slave spaces throughout the University of Mississippi and city of Oxford. However, they now hope to include some of Holly Springs’ many historic sites, specific to slavery.

As part of their preliminary visit, they toured the Hugh Craft House and Burton Place in Holly Springs to take a comparative look at what slave dwelling structures look like across North Mississippi. Also visiting were Mississippi Department of Archives and History (MDAH) historic preservationist Jennifer Baughn and Jack Elliot, Jr., retired historical archaeologist for the MDAH and currently lecturer in geography and religion at the Meridian Campus of Mississippi State University.

“We are so impressed with these structures — the working areas and the main houses — all have an incredible architectural and historic story behind them. We want to come back and see more.” said Dr. Lounsbury of the College of William and Mary, Williamsburg, Va.

Burton Place owner David Person said, “We very much need to catalogue in detail as well as to preserve Holly Springs’ 22 architectural sites related to working areas for enslaved persons. We need also to encourage cultural tourism to visit these sites.

“Having these nationally known experts lending their expertise and encouragement is invaluable in recognizing the treasures we have here in Holly Springs.”