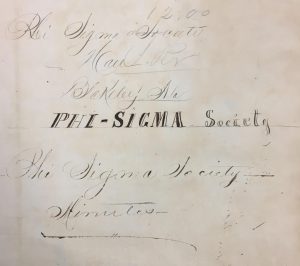 Ledger of the Phi Sigma Society, 1849-1867. The Department of Archives and Special Collections, J.D. Williams Library, The University of Mississippi.

The proslavery mission of the University of Mississippi touched nearly every aspect of campus life. In this, and subsequent, posts, we examine how student participation in antebellum literary societies on campus not only centered around and advanced proslavery ideology but was facilitated by the labor of enslaved people.

On May 5, 1849, near the conclusion of the University of Mississippi’s inaugural academic year, the Phi Sigma literary society recorded their meeting minutes for the very first time. The group had likely met before, but during this meeting they adopted a constitution and established their organizational name.1

Phi Sigma was created, alongside the Hermean Society, by the order of the University of Mississippi faculty and administration. Because of frequent misbehavior, faculty mandated that each student join a literary society. In addition to their hope that membership in such organizations would help instill discipline, faculty also claimed that participation in fraternal literary societies was both an essential component of a complete college experience and an activity that would reinforce the proslavery mission of the university. Given the importance faculty placed on these groups, it is perhaps unsurprising that they frequently participated in the academic debates conducted by the societies.2

Students debated a wide variety of subjects, including those that touched on history, foreign policy, and philosophy, but the questions Phi Sigma members addressed most frequently centered on slavery, nullification, and secession. In the decade or so before the Civil War, for instance, Phi Sigma members were asked:

Is there a probability that the American Union will be divided within fifty years?

Was the nullification of South Carolina justifiable?

Would the southern states be doing themselves a forfeit by seceding from the Union?

Can a state under any circumstance justly secede from the Union?

Will African slavery be perpetuated in the United States?3

The decisions in these debates, which were handed down by the chair, moreover, show the power of proslavery ideology at the University of Mississippi: they suggest that students more broadly believed that the country would shortly be divided, that nullification and secession were justifiable, and that slavery’s future in the United States was at risk.

The meeting minutes of Phi Sigma demonstrate that University of Mississippi students were deeply aware of current events that touched on slavery, nullification, and secession. Students heard constantly about these issues in their courses, and they discussed them frequently in their literary societies. These students would later communicate their own proslavery views through the publication of literary magazines, and their devotion to slavery would lead many of them to take up arms for the Confederate cause.

1 The minutes explain that in previous, more casual, meetings the Society went by the name Phi Beta Kappa. After realizing or being informed that their initial name had already been adopted by another group at the College of William and Mary decades before, University of Mississippi students took the name Phi Sigma, which stood for Philostephanie or “lovers of distinction.” Only the last names of the students in attendance at this meeting are listed, and because several students shared the same surname there is some difficulty in identifying all of them. That said, J.H. Bramlett, James William Lambuth, James Hamilton Mayson, John Townes Mosely, John L. Hudston, John Bannister Herring, Joshua Long Halbert, T.S. Wyatt were present, along with one member of the Kilpatrick family (either E.P. or J.G. Kilpatrick), and one of the three Phipps brothers (Jordan McCullough Phipps, Richard Wright Phipps, and B.S. Phipps). Professor John Wadell was also present. Phi Sigma Debate Society Meeting Minutes, May 5, 1849. The Department of Archives and Special Collections, J.D. Williams Library, The University of Mississippi.